Photo Follow-Up: Making Progress with the Light Box and Lightroom

So I don't know what was wrong with me that first time I tried Lightroom last week, but I did have much better luck the next time.  Well, the next day, actually, my light box kit arrived, so I had to give it another shot, so to speak.  So I did a little photo shoot in my new light box kit by Square Perfect, and then tried editing in Adobe Photoshop Lightroom 4.


First, I have to say that the light box was great, but not the  cure-all I was hoping for.  The kit I got comes with two little lights, a little tripod, velvet backdrops in white, black, blue and red (although for the life of me, I can't imagine I'll ever use the blue or red), and the collapsible light box itself folds into a nice sturdy case that holds everything.  My only real complaint about the kit is that it didn't come with instructions, and I was confused about how to set it up.  At least one side has to be black, i.e., opaque.  My instinct told me this should be the back, but the photo on the box shows the black side on top (or maybe even the back and the top).  I stuck with my instinct and set it up so that I'd have natural light filtering in from the top, with the lamps lighting each side.  I was disappointed that this set-up did not allow as much light in the box as I had hoped; I expected flooded natural-looking light with absolutely no shadows.  I will say that even thought I don't really love the look of a pure white background, it did allow the colors of my products to show better than on the natural travertine stone I'd been shooting on.  So, I think this is a style compromise I'm willing to make.  Maybe I can make up for the boring white background with more props.  And I'll try shooting in the light box on very sunny days, to see if that helps.  Although I must say the idea that, in a pinch,  I can do a decent photo shoot any time of day -- regardless of the whether it's a cloudy or sunny day -- takes some of the pressure off.


As for my Lightroom experience, the second time around was much better.  The first day, I had trouble at every step.  I couldn't even figure out how to import photos off my camera into the program.  And then, even though I was doing okay with the "developing," i.e., editing, I couldn't figure out how to do the key things I really needed to do for my Etsy shop: (1) make sure the files were in sRGB color mode instead of Adobe RGB, so that hopefully, the colors wouldn't change when I uploaded them; and (2) reduce the file sizes to no more than 1000 pixels.  I kept trying to watch tutorials, but they kept buffering.  Arghh!


The second day, I looked at some non-video tutorials and quickly realized that you choose the color space (the sRBG option) and the file size when you export from "Library" mode.  Aha!  Things went much more smoothly after I figured that out!  And miraculously, the second day, when I clicked on "Import," it automatically pulled up my camera as an option.  In "Develop" mode, I was able to make some improvements to the images, but I still didn't really know what I was doing.  (Notice that the white background does NOT look white!) I was disappointed that the "auto" functions for white balance and tone did not do the trick; in fact, they looked awful.  I had this fleeting fantasy that I could just hit "auto" and magically make each photo perfect.  The background got somewhat "whiter" when I realized I had to click on a neutral gray with the white balance eye-dropper.  Lucky I had those shadows after all!  It's still not great, but oh well.  I know if I keep working on it, I'll keep getting better.  I have 23 days left on my 30-day free trial to get good enough to feel like it's worth paying for!


So these are the first few photos I edited and exported as sRGB in Lightroom.  By the way, they're not optimal, but I sent these three photos with an application for my first juried craft show. I'm looking forward to a live-and-in-person venue where people can see and touch my creations, and I don't have to rely on photos to convey their vibrant colors and soft, fuzzy textures.  In the meantime, I do hope to get better at this photo editing thing, so that looking at photos in my Etsy shop will be the next best thing to seeing my felted jewelry and accessories in person.

Getting Photo Savvy for Etsy: Can I Figure Out How to Use Lightroom and a Light Box?

This week, I am feeling overwhelmed by how technically unsavvy I am. My goal for this week was to get a light box and learn to use Adobe Lightroom software, so that I can optimize my photos for my Etsy shop. At the moment, my photos do not do justice to my creations. Those of you who have Etsy shops are likely very familiar with this problem. For whatever reason, when I upload photos to Etsy, no matter how good they look on my computer, they become dull, drab and lifeless. It’s aggravating to say the least.


Anyway, I did such a crappy job of taking photos of my paintings, that I hired my very talented photographer friend, Charles Sichel-Outcalt, to take professional photographs for me. (He was already working on creating incredible giclee prints of my paintings) OMG! When I saw his photos, I realized just how much room for improvement I have in all of my photography. His photos of my paintings are vibrant and true to the originals, and the colors magically do NOT change when I upload his photos to Etsy. Wow! Mine, on the other hand, look like I spilled coffee on them.

Here’s the thing – while I have lots of natural light in my house (well, probably too much), I don’t have a single white wall. There’s just no place in my house to photograph my art without building my own photography studio. So I knew I needed professional help to photograph my art. I thought I was doing an acceptable job with my felted jewelry and accessories on my own, but now I realize that better lighting and the right software can make a world of difference.


Charles has encouraged me to use Lightroom editing software to optimize my photos. I downloaded a free trial version and tried it for the first time today, but I’m already frustrated. I’ll keep trying, and I’m excited to get my light box kit tomorrow. But if I can’t get up to speed pretty quickly, I may end up paying Charles to photograph all of my creations.  Oy!  I'd just rather be felting or painting, frankly.

At least then I know I’ll be sure to get professional, beautiful pictures that will really capture the true colors and textures of my work. Charles is brilliant with a camera as well as with photo editing software.  He blogs about his photography at Honeysicle Studios and sells his work on Etsy with his business partner, Honie Howarth. Here are a couple of his incredible images –- true works of art. Enjoy these and be sure to click over to his blog and shop to see more.

When I launched this blog, I promised to share our experiences with the agonizing and exhilarating experience that is home remodeling.  So, for starters, this week I’ll show some before and after photos of our house and highlight a few of the design elements, particularly those that were inspired by Frank Lloyd Wright’s prairie style homes of the early 1900’s.

I chose the prairie style because it feels very modern to me, even after more than 100 years.  And yet it is not so modern that my house would stick out like a sore thumb in our traditional neighborhood. I love the hipped rooflines, especially with multiple levels.  And the deep overhangs not only look beautiful and extend the horizontal lines of the house, but they keep energy costs down by shading the house in summer.  Frank Lloyd Wright was a genius when it came to marrying form and function, and I tried my best to follow his example.  I also share Wright's affinity for geometry and incorporated compositions of circles and squares throughout the exterior and interior of the house.
By the way, getting that hipped roof and the deep overhangs made this remodel much more extensive.  You can’t very well live in the house through construction if they have to rip your whole roof off!  We decided it was worth it because we wanted to “pop up” and build the kids’ bedrooms upstairs, but man, we didn’t really know what we were in for.  The demolition alone took five months.  I was concerned about our impact on the environment and hated the idea of a teardown, so we were trying hard to work with the original floor plan and footprint.   But ultimately (and ironically), we would have saved lots of time and lots of money by doing a teardown.  So that’s my remodel advice for this week, keep your renovations simple (avoid lots of demo) OR, if your changes will be so extensive that you can’t live in the house during construction, get advice and budget projections early on to figure out whether a teardown is more efficient and economical.

Felting in an Early Spring: Ladybugs and Dragonflies and Butterflies, Oh My! 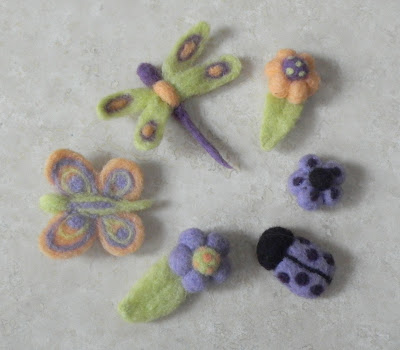 After the incredibly mild winter we’ve had this year, I was not surprised to see that Jimmy the Groundhog was right about an early spring.  Not only did my crocuses bloom this week, but my garden is awash in beautiful little periwinkle flowers.  Some of our daffodils have even blossomed.  All of these signs of spring sent me into a flower-felting frenzy.  And that led to a critter-crafting craze.  All of which apparently led to a lot of alliteration.
I was a little mad at myself last week for not posting on my blog, but I just couldn’t get myself away from all the little daisies and bugs.  Anyway, here are some of my latest needle-felted creations:  ladybugs, dragonflies, butterflies and bumblebees – each one with a coordinating daisy.  I know I need to branch out into other types of flowers, but the daisies are just so cute, especially with the polka dots, and they’ve always been my favorites.
Another long-time favorite of mine is the ladybug.  It’s perhaps the only actual bug I’m happy to see in my house.  I’m more than willing to believe they are a sign of good luck.  When I was a little girl, my mother knitted me a ladybug vest with a matching purse. Oh, how I loved those things, especially since she made them herself.  I think part of what I enjoy about making these cute girly things is imagining some little girl feeling that way about what I’ve made.

Also, in a house full of boys (even the cat is a boy), I guess I need a creative outlet for my  girly side.  I’m still trying to figure out what I could felt for boys.  When I ask my kids, they just roll their eyes at me.  I’m open to suggestions.  :-) 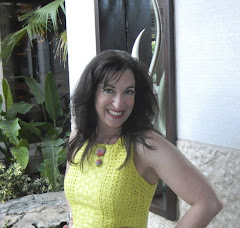 Jill
I'm a lawyer-turned-artist who is finding happiness creating modern, funky art and felted wool jewelry and accessories. I also do lots of other creative projects. Follow me on this blog and check out my new website, including my shop, gallery and listing of craft shows where you can fine me. I hope you'll check it out!